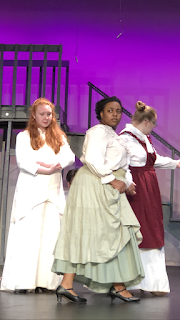 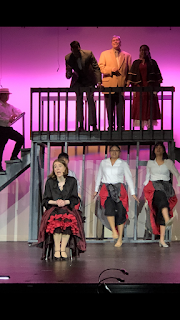 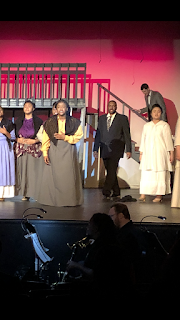 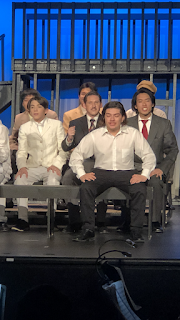 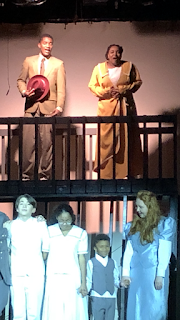 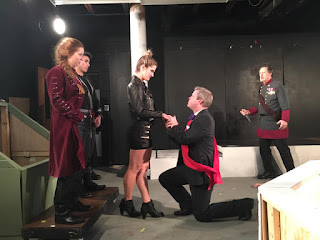 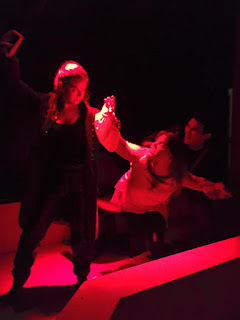 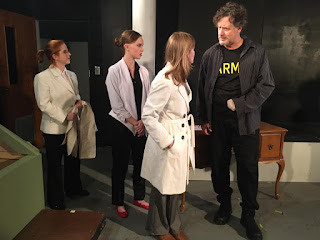 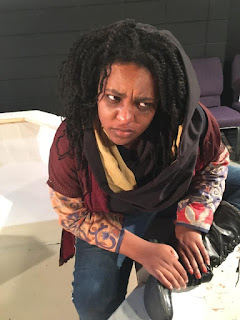 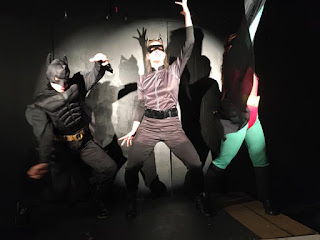 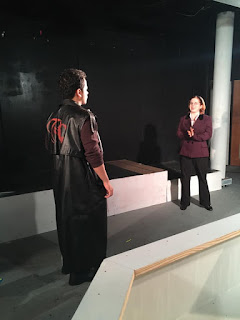 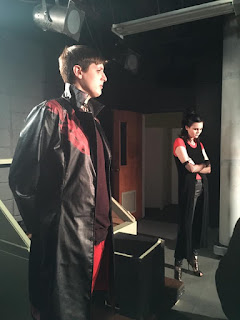 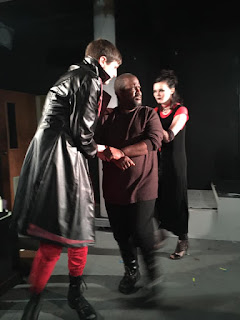 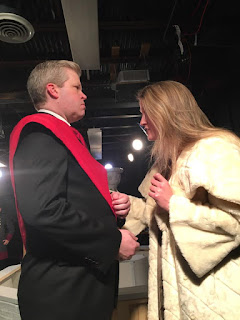 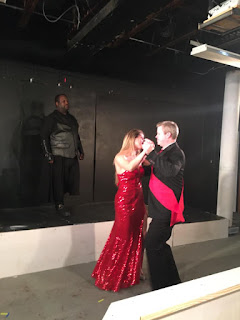 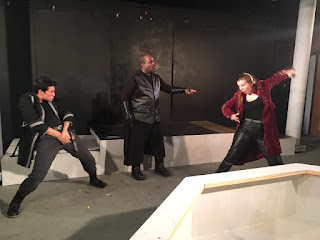 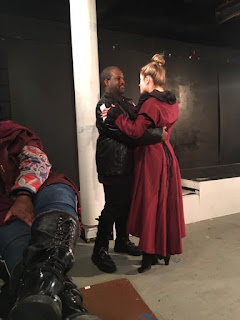 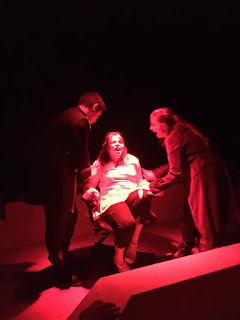 We've been super busy costuming shows. Since we have a lull, we might as well update with some photos 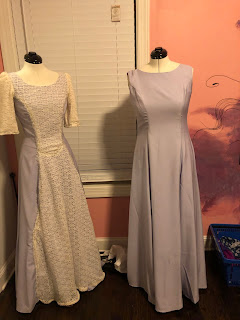 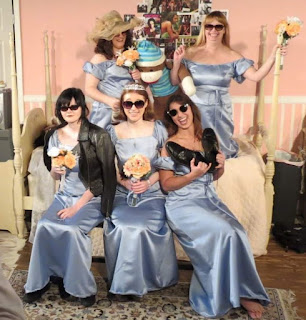 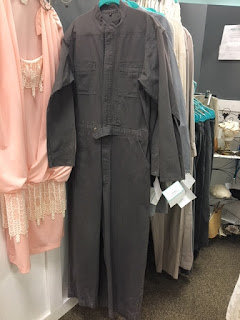 These flight suits are rare and were used in the Mockingjay (Hunger Games) movies.

Khaki Green one piece.  I also used some of these to make costumes for Farenheit 451

This is one of several Hunger games Items we are currently listing.

Email ThisBlogThis!Share to TwitterShare to FacebookShare to Pinterest
Labels: Costume for Sale, ebay

When I wrote my last post, we hadn't actually seen Kinky Boots yet. I chose seats on the main floor, but as it was a last minute choice, our seats were all the way in back, so there was some leaning and neck craning going on.  The photo shows our view, and we didn't really miss any of the action.

I went in thinking Kinky Boots was going to be this provocative, edgy, in your face kinda show, but it was actually very sweet. If you are going to it to Cyndi Lauper's music, I went in expecting "Girls Just Wanna Have Fun" and got "True Colors".  We enjoyed it greatly, got some merch, and that ended our broadway week with an "ahhhhhhh"  That was nice!

The costumes were fabulous. We drooled over the boots and the outfits that Lola and her "gals wore".  The factory costumes were appropriate for the characters.  Nothing ever stood out as too much or too little. 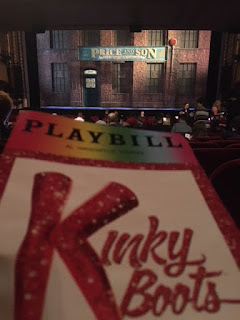 The set was a factory front at first sight, but it opened up to show the inside of the factory, or a performance room, or a fashion show catwalk... whatever was required at the moment.  It was simple, with moving pieces (moved mostly by cast members) and it worked seamlessly.


There was a bit of bonus to our week.  A few days before my trip I got a text from a young friend/entertainer in NY.  I had made a few costumes for him 2 years ago for a one-man show. I knew he was working on an off-broadway piece that had been workshopped and in development, but it turns out it was about to open.  The email read: We are using the costumes you made me in the show, how should I credit you?  My answer was My Name!  Put My Name in the program?

Unfortunately, we were flying in on Monday and Out on Friday morning, and the show was on weekends only, but we went to a tech rehearsal and got a food feel for the show.  It is called Le Blanc, and is running through August.

Posted by Ahermitt at 9:52 AM No comments:

My business associate/daughter and I are almost done with your somewhat yearly trip to see shows in NYC.  This one worked out especially well because we lined it up with my husband's business trip and so the hotel cost was lessened greatly.

Anyway, as costume designers and community theatre workers, getting away to see shows on Broadway is a special treat and an opportunity to fuel our imaginations and inject some fresh eye candy into our own creative juices. 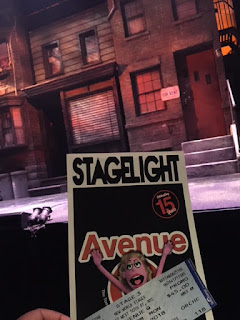 On Monday, we saw Avenue Q.  I have been dying to see this show for many years, but my daughter said it was for adults and I didn't qualify.  It was amazing.  (Oh those naughty, naughty puppets!)

Costume-wise, I was amazed that the puppets had so many costume changes. The changes pretty much went along with the storyline and were just noticeable enough to recognize that they had changed clothes to match the scene.  The puppeteers wore cute and comfortable outfits, all in pretty much gray, or washed out black which read as gray. They didn't detract from the puppets at all, but at the same time, you noticed them just enough to admire the hard work of puppeteering.

The human characters had alot of costume changes just like the puppet characters.  They were dressed, pretty loudly, and appropriate for their characters and situation.  My favorite human costume was Christmas Eve's bright colored pants with Kimono tops. Her costume change was very subtle... Pretty much same costume with a slight color change.  Sneaky but awesome.  Her wedding dress was a bit much, but it's a puppet show... go for it!

We spent some time after the show trying to figure out how backstage must have been built.  The audience sees the facade of three buildings and the action happens either from the windows or the sidewalk in front of the houses, much like Sesame Street.  But the cast moved so quickly from window on one side to window on another side to street so quickly, we surmised there must be a set of ramps and planks and such.  I sure would love to go backstage on this set.

On Tuesday we saw The Play that Goes Wrong. Our seats were the worst seats I have ever sat in-- in my life.  The hilarity of the show made up for it.  *note  If you are over 35, don't get the seats in the upper balcony.  There are too many chairs, and the seats are crammed so close together that you can't sit shoulder to shoulder.  Everyone has to sit and an angle. The upside is that you get to see the tech booth and tech person who are a huge part of the show... I don't think you could see them as well from the mezzanine.

Costumes were appropriate, with pretty period perfect ensembles, which devolve over the course of the show to basically, whatever works for the gag as things go wrong, very, very wrong.  Once again, we were entranced by the set, which the audience is encouraged to observe during a bit of "pre-show" hilarity as they seemingly put the last details together, with serious trouble, even pulling someone out of the audience to help.  From our bird's eye view, you got some great hints as to what was going to not go so well during the show. 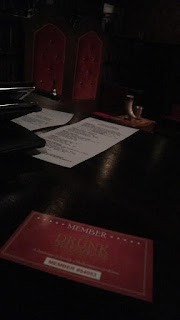 On Wednesday, we say Drunk Shakespeare. I didn't realize at first why they had to check out driver's liscences upon entering. I thought they were making sure we were the ones who purchased the tickets.  Then they handed us shots.... ohh... Druunnnnkkkk Shakespeare... we are expected to drink. ... and possibly participate in shenanigans.  Costumes were modern and pretty casual... so the actors were just dressed kinda nicely. (This is how I have been dying to costume a Shakespearean show, buy the way.) There were assorted small props to help everything make sense.

The mind-blowingly beautiful part of the production was that the set/theatre was essentially a reading library.  Actually, it was a library and a bar at the same time. Really cool. I could live in that room.  I love the part that the effort was made because this show could have worked in a simple black box, so the warm library surroundings added the perfect ambiance. The mezzanine seat was basically benches lining the interior of the room and the balcony was seating at a bar, just above that level.  It is easier to enjoy or snack or drink at the balcony level.  No matter where you sit, you are in the action. We ended up being recruited to commit murder.  Good fun. Really raunchy.  Decidedly liberal in the jokes/gags.


One show to go:  Tonight we see Kinky Boots!  I sure wish Todrick Hall was in it right now, but I am sure whoever is in the lead will be fabulous.  Knowing what we know about that show, it is going to need a post all to itself to talk about the costumes!

We got all our tickets through the TodayTix app.  You get a really decent discount, and we got second-row seats for the first show, horrible seats for the second, so that's a crapshoot. But we were able to afford to see 4 shows in a row without too much financial pain.  (We need this service in ATL).
Posted by Ahermitt at 10:26 AM No comments:

Ripped Seams and Upcycled Goods has an Ebay account.

We will  be posting neat finds that aren't exactly costumes or vintage items.

This week we have: 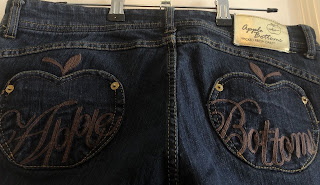 Posted by Ahermitt at 9:58 AM No comments: