Got a mention on BroadwayWorld.com

My theatre group out of a suburb in NE Atlanta got a great mention on TheatreWorld.com. It is for the show that is currently running.  It is called ReEntry and is about Marines and their struggle returning home.

I'm going to be a little modest and say that this was one of my easier costuming jobs, but it did take special care in being respectful to military garb.

Posted by Ahermitt at 7:16 AM No comments:

As Halloween grows closer, so does the conversation of racially insensitive costuming.   I touched on this briefly yesterday with Halloween Costumes vs. Cosplay, but the subject requires deeper thought. The reason it needs further discussion is that there are a lot of mixed signals out there as to what is correct and what it not.

1. Native American Costumes: First, there is a difference between dressing up as a Native American and wearing an Indian costume. As Native American's have pointed out very clearly, wearing shredded rags and assorted beads is not a proper costume.  Neither is carrying a tomahawk and making noises while patting your lips with your palm.  Native American clothing has meaning, from the beads to the fabric, and if you are going to try to embody a Native American, and I strongly suggest you don't do it for Halloween, which is supposed to be lighthearted and fun, do it in a way that honors a particular historical figure; not in a way that mocks a stereotype of an entire people group.  Oh, and while we are at it, please avoid other stereotypical costumes such as a pimp, a gypsy, a hooker, a rapper or thug, and etc.

2. Black face: For the love of God, no! Just don't do it.  If you disagree with this strong suggestion, perhaps you are not educated about why blackface is offensive.  Here is the wiki page on Blackface and here is a clear explanation on why it should not be done. My best explanation is that there is no difference between blackface and the rebel flag.  (They both give us black people the willies.... or evoke rage.) Also, you can easily costume as a person of a different race without painting your skin.  Black people do it all the time, especially since most costume options sold in stores are lighter skin characters.  It's just not necessary.  If you and your friends really, really, want to dress up as the Jackson 5, just get some wigs and crazy, crazy outfits and you're good.  We will get it!  Thanks.

3.  Sexy children costumes: Umm... why?  There is no reason for a 12 year old to show the entire length of her leg to be Dorothy from the Wizard of Oz.  Frankly, I think parents can do better than to give in to the whims of children, and the marketing of the costume industry.  Instead of buying a Dorothy costume, head to the thrift store for a blue dress, buy the red shoes online, and braid the hair appropriately.  All it takes is some imagination to keep your kid from going out on Halloween looking like a street-walker... literally.   Or better yet, come up with a real live historical person your daughter admires and have her dress as that person.  Here are some ideas.

4. Death: Ok, I hate, hate, hate Zombies, but that's not my problem.  Please don't dress up as dead people.  Some of the worst costumes that fall into this category includes Trayvon Martin,  Any celebrity that has recently committed suicide with a belt around their neck like Robin Williams, Zombie Joan Rivers, and anything depicting domestic violence, aka Ray Rice.

So what can you wear?  Well, it's Halloween, so you can't be too scary, and then there's tons of historical and superhero stuff too.  So have fun out there, but be sensitive!

Posted by Ahermitt at 1:23 PM No comments:

Email ThisBlogThis!Share to TwitterShare to FacebookShare to Pinterest
Labels: Articles

I have always had a love-hate relationship with Halloween. I always enjoyed the make believe aspect of Halloween, but never cared for the late night antics, and then there's the fact that I don't like sharing my candy!

Of course, Halloween is the original dress up day, but cosplay eras have made it a way of life.  For people like me, who enjoys making costumes, and people like my daughter who is always wearing some semblance of a costume, this is a beautiful thing.

My other dissatisfaction with Halloween is the cheapness or inauthenticity of it.  I somehow got caught up in a Facebook discussion the other day after posting a video of Native Americans explaining why "Indian" Halloween Costumes were bothersome and disrespectful. Of course someone got angry, mostly because she'd dressed up as an "Indian" many times and felt like the video tarnished the memory of the good time she had.

This is where cosplay is different.  A serious cosplayer would not dress up as a random "Indian".  They would do their homework and dress as a specific Native American or Native American character, and be as specifically authentic as possible.

Of course, this is just an example.  Most cosplayers don't choose to dress as people groups, but as specific fictional or semi fictional characters. Many also dress as characters they make up themselves based on a time period or genre. Yes, this is a lot to swallow for a novice, but I hope it gives the casual Halloween Costumer something to chew on.

And if you are hoping to win that costume contest at the Halloween party, you might want to look at what the cosplayers are up to!
Posted by Ahermitt at 8:50 AM No comments:

Email ThisBlogThis!Share to TwitterShare to FacebookShare to Pinterest
Labels: Articles 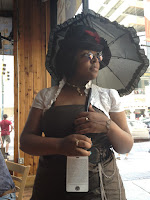 Ripped Seams is a family affair; a mother-daughter enterprise. When we are not creating costumes for community theatre or college theatre (daughter), we are combing the thrift stores for interesting clothing items we can transform.

Between the two of us, we have costumed a dozen shows in the last few years, and have also frantically made several cosplay outfits for our own amusement.

Stay tuned for one of a kind clothing and costumes made from thrift store finds. Items will be posted in blog format with the price and a purchase button.  the button will be removed and marked "sold" as they are purchased.

We apologize for not having items available for Halloween, but we will post useful articles for you. We are both finishing respective shows at the moment, but check back in November 2015 as we start posting items on sale for Christmas.

Thank You and Welcome!

Posted by Ahermitt at 8:16 PM No comments: